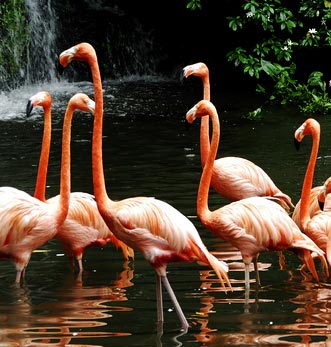 When making an enclosure for flamingos, you should make sure that the birds get the best possible living conditions, even if you try to accommodate the viewing public.

Outdoor exhibits should be built while keeping in mind the desired maximum size of the flock compared to the current flock.

You must allow enough space for the flamingos to engage in their ritual displays and breeding activities.

You must also allow areas for sunning and nesting, with the recommended size of an outdoor enclosure based on being 1.4 square meters or 15 square feet for each flamingo.

There are many different exhibitions of flamingos in zoological gardens and bird parks around the world. They are usually kept in outdoor enclosures containing shallows ponds.

Being tropical birds, they require housing during winter season in northern climates, to prevent frostbite. In some cold countries like Canada they are kept inside for the whole winter. In some cases the flamingos start laying eggs because their small winter accommodation stimulates the feeling of a breeding-colony. In milder climates like in Europe, the flamingos can be kept outside in the winter on day-time.

The kind of exhibition will depend on the space, the inspiration of the designer, and the budget allocated for the work. Less developed exhibitions can have a small pond with a portion of land as part of the shade.

It is always recommended to have a minimum of 10 birds in the exhibition because they are colonial birds usually found in large groups. Their being in a group allows these birds to perform many of their activities, which accounts for the wellbeing of the birds kept in enclosures. 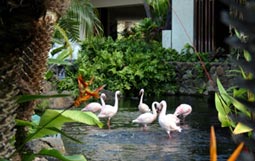 Larger enclosures, which have a portion of land with mud used by the flamingos to build their nests, are seen in many zoos in the world.

Having good nutrition, enough space to walk in, sunbathing, and the chance to filter water through their bills is enough to keep these beautiful birds in the enclosure for a long time.

Since they are birds with a long life spam, they can reach up to 60 years in the enclosure.

The exhibitions combined with ornamental plants in the proper places, and some trees to provide shade would be nice landscapes for the visitors.

The same enclosure can include other aquatic birds, such as ducks and geese, but it is also important to avoid the competition for food. This is done by providing enough feeding places and even keeping away other birds.

Many exhibition places are mainly open-air enclosures so the flamingos have to be rendered flightless. This is done through pinioning the wing feathers. Studies have shown that pinioning hinders reproduction since the male finds it difficult to balance during copulation.

There are now recommendations to design exhibition places that can allow for full winged flocks. In that situation the enclosure needs to be covered on top with a net to avoid flying away. This has several advantages to the flamingos, as it reduces the threats of predation and having their food stolen by other birds like gulls. Fertility has also been shown to increase. 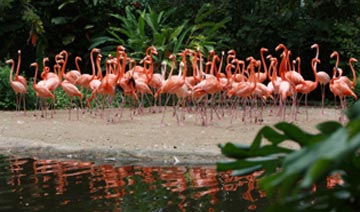 The famous Richard Branson, owner of Virgin Airlines, keeps his large group of flamingos un-pinioned and completely free on his beach on his private island in the Caribbean; the supplier International Flamingo Services professionally cut some feathers from the wings which avoid flying away, before they were shipped.

When the birds after several months moult and got new feathers they were so customized to the area with rest and sufficient food that they made no attempts to fly away.